What is "Sacred Harp singing"? 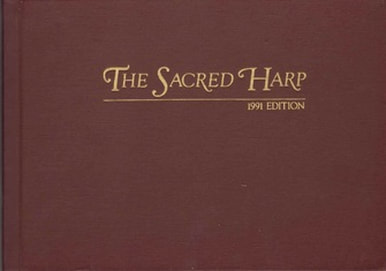 Sacred Harp singing is a tradition of community singing that originated in colonial New England, and, while nearly having died out at the beginning of the 20th century, has been preserved for generations in the South of the United States.
The name is derived from The Sacred Harp, a  tunebook printed in shape notes first published in 1844. The book is a rich collection of shape note songs from various sources, from the 1770s to the present day. There are different versions, but the most commonly used is the 1991 Denson Edition, also called "the red book". Because it is the most widespread of shape note books, its name has become a synonym for the musical singing tradition.
"Sacred Harp" is a metaphor for the human voice - the one instrument everyone has been given from birth.

Shape Note singing is a living tradition - it lives through the people singing it, meeting for smaller "practice singings" (like our Thursday singing) or bigger All-Day singings or conventions, where 50-150 or more singers gather and sing for one or two days in a row. A potluck dinner is always part of the event, socializing is nearly as important as the singing and the community spirit is very strong and inclusive to all kinds of people. 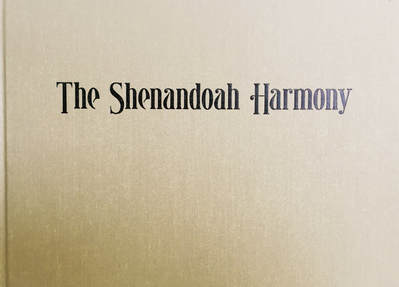 What's the deal with the shapes?

The four-shape system which is used in the Sacred Harp is an old solmisation system, similar to the better-known seven-shape system Do Re Mi Fa So La Ti. By singing every song first by it's "shapes" (syllables) and then by the words, the singer automatically and intuitively learns the interval relations between the notes. This makes sight-reading music and learning new melodies a lot easier. Trust us, it does! (although it usually takes a while). We have trained choral singers in our group who absolutely swear by the shape notes by now, and never want to go back to plain round notes.

Because we sing a cappella, meaning without instrumental accompaniment or any reference instrument, there is always a designated person who gives the key - from memory or ear. And because of the shape note system, we only need to know if a song is major or minor, and our starting note, that's all.

Why do you sit in a square and wave your arms up and down? 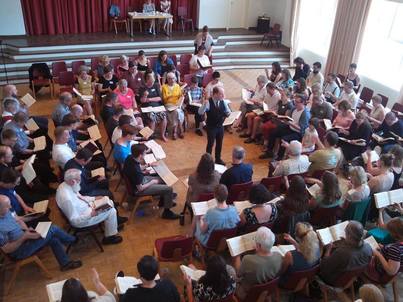 Shape note music is sung in four parts: treble, alto, tenor and bass. The treble (high) and tenor (high to medium) voices are both sung by female and male singers, so that it can in fact be a six-part-harmony. Because we sing for each other and not for an audience, the voice parts are arranged in a square, facing each other. The empty space in the middle is called "the hollow square". Into this hollow square, a different leader steps for every song and leads the song of their choice. We don't have a choir director who gets to decide what is sung - instead, everyone takes turn in chosing and "calling" a song from the book.
Experiencing the sound in the middle of the hollow square, being sung at from all surrounding directions while leading a song, is the most amazing feeling!
Shape Note singing is egalitarian and democratic. We sing for each other, and everybody gets to lead a song. 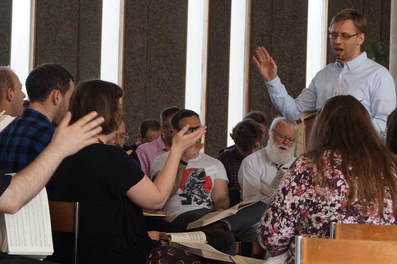 The arm- or hand-waving is called "beating time" (in German, the term "Wedeln" has somewhat established itself). The leader in the middle of the square sets the tempo of the song by their beating. The other singers thus take the tempo from the leader, and if all (or at least most of) the singers do that, it helps the singers to keep their time and to keep singing together in time.

And the lyrics? There sure is a lot of death and apocalypse in there... 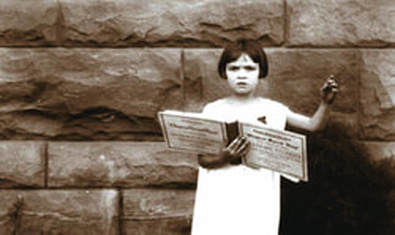 Because of its history as church music in New England, Sacred Harp lyrics are very religious and often also quite gloomy. A lot of songs speak of the mortality of humankind, how short our life on earth is, and of the great hope of salvation after it is over.
Even if you are not Christian, or not religious at all (and you don't have to be to sing Sacred Harp music), you can interpret this as a memento mori for our modern times. Or simply enjoy the music! It's a bit like singing Bach - if you can sing "Oh Haupt voll Blut und Wunden" and be okay with it, then the lyrics of shape note songs shouldn't be a problem.

Deutschlandradio Kultur did a short feature about our singings in Berlin! You can read it here (in German).

Some short video documentaries about Sacred Harp singing (in German and English):